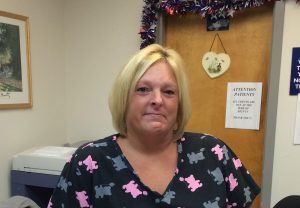 We could all learn a thing or two about compassion from Kara Utter.

Kara, a receptionist with Middletown Medical’s cardiology department, recognized Middletown Medical patient Dawn Lightfoot when she spotted her in the parking lot of the Middletown Walmart recently. She also quickly realized that Dawn was in some sort of distress.

Dawn, a diabetic patient whose blood sugar had fallen to 25, was pacing back and forth in the parking lot, navigating up and down the rows of cars. She was clutching her cart and hanging over it as a means of keeping herself on her feet.

“There were frozen groceries in Dawn’s shopping cart that had started to defrost,” said Kara. “She must have been out there for a while.”

Instead of turning away with a typical “not my problem” attitude, Kara approached Dawn to offer help.

“(Dawn) was holding her car keys in her hand, but couldn’t remember driving to the store,” Kara recalled. “I could tell she wasn’t well… she didn’t know where she was, who she was, or how she had gotten there.”

Kara phoned 911, and did her best to offer Dawn comfort while they both waiting for the paramedics.

“I tried my best to help her understand she wasn’t alone, that even if she didn’t remember, I knew who she was,” said Kara. “I told her that she has a daughter, Summer; that she has a husband.”

“I did eventually recognize her voice,” Dawn recalled. “Not necessarily who it was, but that it was familiar to me, and that was very comforting in such a trying time.”

It took some time, but eventually Dawn was also able to remember her son Taurean’s phone number. Kara phoned him too, and told him that his mother was on her way to Orange Regional Medical Center.

Kara followed the ambulance to the hospital to ensure that Dawn was admitted without delay. As it turned out, Dawn’s dangerously low blood sugar level had brought her near diabetic shock.

A week later, Dawn stopped by the Middletown Medical Cardiology office to thank Kara for her kindness.

“I’m lucky that Kara was kind enough to stop and help; she may very well have saved my life,” Dawn said.