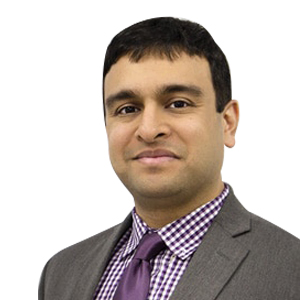 Dr. Jay V. Doshi is a board-certified Cardiologist specializing in Cardiac Electrophysiology, the study of the electrical activity in the heart to diagnose and treat abnormal heart rhythms.

Dr. Doshi has served as the Director of Cardiac Electrophysiology services with Northwell Health at Phelps Memorial Hospital Center in Sleepy Hollow, N.Y. and Northern Westchester Hospital in Mount Kisco, N.Y. He has also been a member of the faculty at both Albert Einstein College of Medicine in the Bronx, N.Y. and at New York Medical College in Valhalla, N.Y. as an Assistant Clinical Professor and an Instructor of Medicine, respectively.

Dr. Doshi has completed fellowship programs at Montefiore Medical Center, affiliated with Albert Einstein College of Medicine (in Cardiac Electrophysiology) and Westchester Medical Center, affiliated with New York Medical College (also as a Chief Fellow in Cardiology). He completed his residency in Internal Medicine at North Shore University Hospital in Manhasset, N.Y., an academic campus for the New York University School of Medicine.

Dr. Doshi earned his Doctor of Medicine and his Bachelor of Arts in Computer Science from the New York University School of Medicine in New York, N.Y. Dr. Doshi has volunteered with the Larry King Cardiac Foundation and the American College of Physicians.

He is certified by the American Board of Internal Medicine in Clinical Cardiac Electrophysiology, Cardiovascular Disease and Internal Medicine and has been a member of several professional organizations including the Heart Rhythm Society, American College of Cardiology, American Medical Association, American Heart Association and the American College of Physicians where he has served on the New York State leadership committee.

He has been described by his colleagues and patients as “empathetic, compassionate and always there for his patients.”

In his free time, he enjoys spending time with his family, playing tennis and enjoying the outdoors.